It’s full moon in the deep summer woods. Puck is out tonight, laughing invisibly with anyone who feels an unexpected rush when the air stirs. It smells warm and sweet and green before the rain, and the ferns are shoulder high. And lovers are looking for each other in the dark.

In August and September, Albany Berkshire Ballet will perform the full-length ballet of Shakespeare’s A Midsummer Night’s Dream. A growing corps of professional dancers will perform new choreography to Mendelssohn’s music, in the company’s first full summer production in 14 years.

In its 50th season, the Albany Berkshire Ballet is expanding with new energy. It is growing a full-time company, creating partnerships with local colleges and choreographers and planning year-round performances.

Madeline Culpo has influenced generations of students, and they are surrounding her now to carry the Ballet into the future.

Culpo became an artistic director when it was rare, even unheard of, for a woman to lead.

“The only reason I was able to do it is that I didn’t know it was impossible,” she says, laughing.

She studied at Jacob’s Pillow Dance Festival and at Juliard, and at 21 she returned to in Pittsfield to teach. She founded the Cantarella School of Dance in 1955. As her young dancers grew, the school grew to support them, and in 1969 she founded a professional company.

She and her husband raised six children in Pittsfield, and she became a warm presence in the lives of many more.

Mary Talmi lived up the street and began dancing with Culpo when she was 8 years old.

“This was a second home,” she says. “You were here four or five nights a week and on Saturdays. And you didn’t want to be anywhere else.”

She has returned to the Ballet this spring as associate artistic director, as more of Culpo’s former students have helped to form a new board, and generations of dancers are getting in touch, excited and full of memories.

“To be in something like Midsummer Night’s Dream,” Talmi says says, “to have kids involved in the arts lifts the whole family into an experience, away from the laundry and the hassles.”

The Ballet has gone on, through the steady decline of GE’s manufacturing here in the 1980s and 1990s, and through the economic challenges of the last 10 years. Talmi believes it is the third oldest continuously running arts organization in Pittsfield, after the Town Players and the Berkshire Museum.

And it expanded widely.

Culpo’s performances traveled to New York and opened the summer of 1978 at Jacob’s Pillow (the first time the international festival in Becket had ever included a local company), and Culpo’s students have gone on to perform with the American Ballet Theater, the Boston Ballet and more.

Her company became the Berkshire Ballet, and then added the Albany Ballet in 1989.

Culpo has taught at Jacob’s Pillow Dance Festival in Becket and across the country, and received three choreography fellowships from the NEA — and her company has worked with top choreographers including the world-renowned Bill T. Jones.

Over the years the Albany Berkshire Ballet has commissioned work by the spare minimalist Laura Dean and performed choreography from Charles Moulton, who has worked with Mikhail Baryshnikov’s White Oak Project among many others, and Philip Jerry, a leading dancer with the Joffrey Ballet in New York.

The ballet has proven its depth of knowledge and experience, Talmi says, as she listens to the teacher in the studio next door, who has grown up in the school, gently leading a class of very young dancers.

The Ballet is making it part of their mission to give dancers employment, Talmi says, to keep them here in the Berkshires, living here, bringing up children and doing the work they love.

“It’s powerful,” Talmi said,” to think of the effect of studying with you, Madeline. The impact it had. And still has.”

Weber, creating her new choreography for A Midsummer Night’s Dream, also danced with Albany Berkshire Ballet, before she went on to become a dancer, a professor and

“She’s dynamic and energetic,” Culpo says, looking forward to her beautiful and fresh interpretation. “And she is unassuming.”

Weber teaches and choreographs around the world. She will fit in Shakespeare between trips to Budapest and China. And, Culpo adds, it is good to see a woman choreographing a full-length ballet.

In Weber’s Dream, Helena and Hermia hold on to love and honesty, in the face of raging fathers and kings. And they walk out into the moonlight, where the spirits set dew in orb spider webs.

‘I know a bank where the wild thyme blows,

where oxlips and the nodding violet grows …

There sleeps Titania sometimes of the night,

lulled in these flowers with dances and delight.’

It is a comedy, Talmi said, beautiful, funny and friendly for children.

“People can laugh with the dancers at love’s vagaries and mix-ups. We have a king and queen, a love potion, a forest and fairies and creatures mixed up together, confused young lovers and the insecurities in young love …”

And she is exploring possibilities for performing outdoors in Pittsfield in August.

The new Dream will preserve the old in a backdrop Thurston Munston (architect of the memorial Mount Greylock created for them when they first performed in 1987, and add new color with costumes by Sam Meredith, who has performed in the original Broadway cast of Swan Lake and with the Metropolitan Opera Ballet.

imagines company dancer Vincent Brewer leaping like a young birch, and she thinks of the work he himself choreographed and premiered in the company’s spring performances, with his brother composed. He calls it Stardust.

“We’re reaching for the sky,” Culpo says, drawing in the people around her with a gleam of mischief and awe, “and I think we’re going to get there.”

Albany Berkshire Ballet will perform Midsummer Night’s Dream at the Egg in Albany on August 23, at the Academy in Northampton on August 31 and at the Colonial Theatre in Pittsfield on September 7, all at 7:30 p.m.. 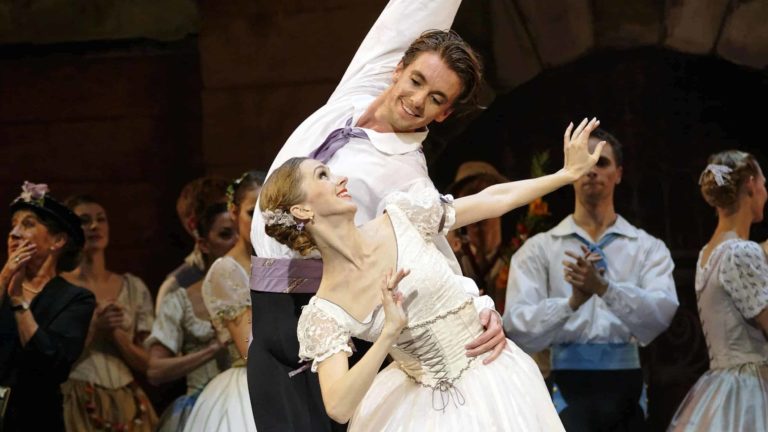