Fiddlers jam in a day of music at Hancock Shaker Village

Imagine holding hands and spinning until the room blurs. Imagine that movement in someone’s arms, to the beat of music. Imagine the musicians sliding from one tune to the next, the melody racing over the chords. Across the country, across 200 years and more, folk dance music has stayed alive. Mill workers have played on their breaks, and farmers at sunset, and college students late into the night. In June, nationally known musicians have brought it to places where Shaker brothers and sisters once danced as a gift, turning and turning to come round right. Oldtone Productions, founders of the the annual Oldtone Roots Music Festival in Hillsdale, N.Y., has created the Northeast Fiddlers’ Convention at Hancock Shaker Village.

The event follows a long Southern tradition, said Oldtone organizer Beth Carlson. It is not a performance — it is a day of music, and anyone can join in.

The musicians will lead workshops and music jams around the village, where people with any level of experience can play or listen to bluegrass and folk tunes, jigs and reels.

“The wonderful thing about this culture” Carlson said, “even in casual jams — people get together and play a song,” and they talk about where they found it. I first heard this version from him. She recorded it. I learned it from my grandmother. Dancers and musicians have kept the tunes alive.

Fredland is internationally recognized for his work in preserving dance traditions. He is a classically trained trombonist, a singer and storyteller, and a caller, the leader who teaches the dances. He and Hudson Valley fiddler Aldo Lavaggi will give a workshop on “Square Dance History through Your Feet,” he said by phone from Vermont, and he will get his workshop moving to music.

Fredland has learned contradance and square dance calling from masters of the tradition, like Dudley Laufman, who led a revival movement in the 1960s that kept contradance alive, and Ralph Sweet in Enfield, Conn., who has taught and called dances for close on 70 years.

As people have learned and shared the tradition informally, the dancing, like the music, has evolved across the country. Fredland has called old country dances and singing squares with the choruses of popular songs from the 1940s, and the rapid slapstick patter of the Auctioneer.

In New England squares, he said, he finds a clear phrasing and connection to the music, slightly different from an old-time Southern fiddle breakdown or the more complicated patterns in a Western square.

“The figures feel different in people’s bodies,” he said

He and Lindhardt and the Belles will lead two large jams, in the Round Stone Barn and the 1910 Barn, and the village will have space for more in quiet corners where musicians and friends can gather.

Lindhardt — winner of many contests and conventions herself — will MC a fiddle contest in the afternoon. And Bill and the Belles will play a dance in the 1910 hayloft at night.

Fredland will call with them, and he is looking forward to getting to know them. He has improvised with contradance musicians riff in high gear, he said, and settled in with equal joy to play old-time stringband tunes.

“It’s so fantastic just to get on that train and go,” he said.

Bill and the Belles have a name for bluegrass and old-time music, Southern and Appalachian, early swing, Carlson said.

They describe themselves as in between hillbilly and urban. The band’s guitarist, Kris Truelsen, also hosts a Farm and Funtime radio show out of Bristol, Virginia and Tennessee, the home of the Country Music Museum.

Grace Van’t Hof, a banjo player from Western Michigan, has co-founded the Grammy-nominated band and toured the world. Karl Zerfas, a roots bassist out of Manhattan, Kansas, grew up listening to his father sing Kansas prairie songs of the 19th century. And Kalia Yeagle, a world-class fiddler from Alaska, finds mountain music in the Chugach and the Blue Ridge.

They all have strong roots in traditional music like Fredland and Lindhardt, and like Oldtone itself. Oldtone comes from musicians: guitarist and banjo player Jim Wright, mandolin and guitarist Kip Beacco and bass player Matt Downing.

Beacco and Downing toured the country and the United Kingdom in a bluegrass band, and they had wanted for some time to found their own festival, they said, with traditional music, music that feels real — non-commercial and non-homogenized. They want to preserve the tradition by bringing people together to feel it.

The Shakers also believed in keeping community by living and working and sharing music and storytelling, said Maribeth Cellana, communications manager at HSV. The museum is a place of living history, looking at the values of the intentional community here as they fit into the present, and turning toward the future.

The village will also offer demonstrations of Shaker arts and music all day, along with the opening of Marko Remec’s Monodic Flow (Field Totem), an outdoor river of mirrors echoing the flow of water from the reservoir. Monody is music for one voice with a simple harmony.

And beside the barn, the village will open its first sound installation, Silo Songs,

music composed by Brad Wells, the founder of the Grammy-winning ensemble Roomful of Teeth and performed by Sam Amidon, Rhiannon Giddens, Eamon O’Leary, and Caroline Shaw. They invoke Shaker hymns, blending their voices into one. 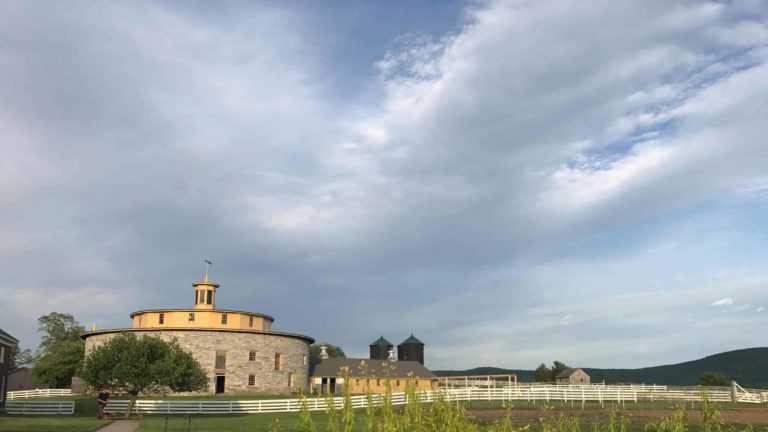 Shaker museums turn together in the Berkshires and New York