In an old town in northern Florida, a woman is walking at night. It’s raw weather even there, and she walks fast, angry and alone, and in the dark her neighborhood looks half marvelous and half brutal — bird of paradise flowers and black swans and old Victorian houses sagging with rot. One live oak spreads over half an acre; her children used to pick ferns from the branches to tuck into her hair.

She sets off into Lauren Groff’s Florida, a book of stories that link around her. On April 26, Groff comes to the Mount for a conversation with Heidi Pitlor, novelist and editor of The Best American Short Stories, opening a spring and summer of writers in the Berkshires.

National and international writers are coming to the region, and not only to Edith Wharton’s house. Salvatore Scibona will come to Bennington College to talk about his newest novel, The Volunteer, crossing four generations from a U.S. marine in the Viet Nam war to a child abandoned in an international airport.

Internationally acclaimed poet Nikki Giovanni will speak at MCLA in June at the college’s first conference on Diversity, Equity, and Inclusion. She has recently released her newest book, A Good Cry, honest and long-sighted, warm and angry and sad, blending the courage of the women in her own family with tributes to Ruby Dee and Maya Angelou, historic turning points and home-made bread.

At museums and colleges, writers will share fiction and nonfiction, poetry and thrillers — and questions that have shaped the last century and will shape the next.

Groff and Pitlor will meet in  Pitlor’s ongoing series of True Conversations talks with women fiction writers. They will talk about what it means to write fiction today, Pitlor says, and explore the kind of questions women writers rarely get asked in interviews.

A quote from Groff inspired the series more than a year ago, Pitlor says.

“She was interviewed by a magazine, the Harvard Gazette, and she was asked how she negotiates work and family, and she said ‘I know that this is a question important to many people, but until I see a male writer asked this question I’m going to decline to answer it.’”

“You get asked so many questions like this — and not about the work.”

Pitlor first imagined the series walking through Edith Wharton’s rooms as she researched her own latest novel, which is coming out next year. Set in Lenox and Lee, it tells the story of a ghost writer working on a memoir for a feminist lawyer, a woman who grew up here and comes back to a beautiful place that has survived some hard hits, as she has.

Wharton also came to the Berkshires to rebuild. When she lived in this house, she was making her name and career as a writer and freeing herself from her marriage. Pitlor thought of all Wharton had created — and imagined her expression if an interviewer had asked her how she negotiated work and family.

And so Pitlor began talking with contemporary writers here, in the last year or more, and she has been looking forward to talking with Groff from the beginning.

“She’s one of the best writers out there,” Pitlor says. “Every word is awake. Every line is alive. President Obama picked her as one of his favorite writers.”

She feels strength in Groff’s courage and clear eye.

Many women, as they get older, start to feel more invisible, she says, and the change is not easy. Lauren’s new book faces that pressure — a women’s anger, her fears and the sense of dread around her.

Groff keeps a balance of dark and beautiful in a town where the the air smells of campfires when old turpentine pine forests around the edge catch fire. Her writing holds a sense of environmental foreboding, Pitlor says, and she wonders, “what does she think the future looks like?”

Pitlor admires risk-taking and depth in language and ideas.

“Some of the best writing out there is breaking barriers in some ways,” she says.

She sees fiction growing more diverse in many ways, in race, class and gender, and she feels it needs to, to be heard.

“We’re in a noisy time right now,” she says.” There’s a lot going on and a lot of competition for readers’ attention. I can’t imagine a noisier time, between tech and the news. We need to be entertaining, and we need to be going deeper, stranger.”

What used to be speculative fiction does not feel speculative now — artificial intelligence, climate science, these kinds of fantasies have become real.

“And now more than ever we need a story to cut through the noise.” 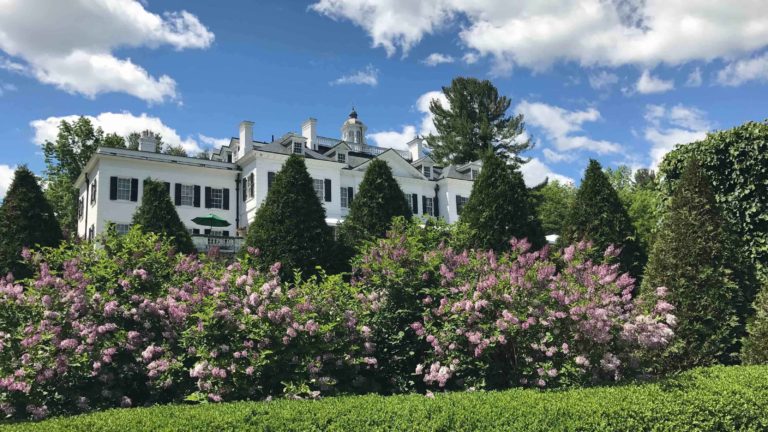 Writers in residence in Wharton’s rooms