A man is standing on the platform, looking at his watch — waiting for a train that hasn’t come in 50 years. Around the corner from the feed store, the old track still runs by the historic station, but it’s now the town hall in the village of North Bennington, and the man waiting out front with his arms crossed and his hat pulled down, isn’t going anywhere anytime soon.

North Bennington is its own place, a village just off the path from Bennington College and the old mill town of Bennington, just over the Vermont border from Massachusetts. It’s the kind of town where you can get a handmade sandwich at the corner market, or a halter for a backyard pony, 50-pound bag of chicken feed and a paper sack of oyster shells.

You can head up the block for a concert at Park McCullough house or walk along the shore of Lake Paran on the Robert Frost Trail. And you can catch sight of a man-high dandelion or an arc of polyhedrons floating like bubbles over the grass.

NBOSS has brought public work here every summer for 24 years, said North Bennington sculptor Joe Chirchirillo. He has curated the show for nine years. After a decade in Jersey City, working with artists in lower Manhattan and Brooklyn, he moved to Vermont to focus on his own work in metal, concrete and more.

And this summer, as the pandemic brings people outside, the annual NBOSS show expanding in more than one direction. It has a new satellite in Hiland Hall Garden in North Bennington, he said: “It’s a serene place — it’s beautiful up there.”

He has collaborated with curator Jamie Franklin at the Bennington Museum to bring new work there for the second summer in a row, through the grounds and along the wildflower trail, and in North Bennington this year, sculpture spills over from the lawn of the Vermont Arts Exchange and through the village, and out to Bennington College.

‘If I come into a community and see public art, I feel different about that town than I would without it, because I feel as though this community is trying to be more inclusive — of everything.’ — Joe Chirchirillo

Chirchirillo has built a network of artists across the years, and he is steadily expanding it— he has 42 artists involved this year, he says, and a third are artists new to the show. They come from more than a 200-mile radius, from the New York metro area to Northampton to Rhode Island.

Lee Williams has evolved a new environmental sculpture in a wooded stretch on the Bennington College campus, Chirchirillo said. Williams has cleared some space and integrated his new work with the forest.

Up the road in North Bennington, José Criollo, a sculptor out of Worcester, has formed a giant turtle from welded steel. He stands in the park across from the Vermont Arts Exchange, sharing the grass with Harlan Mac’s steel giraffe, and a tall figure of a woman sculpted from brick, and a metalwork figure with a fire pit at his feet …

Brooklyn N.Y. artist Max Yawney builds his own large installations on site, Chirchirillo said, often broad structures ringing a central object like a sacred circle. A short way up the road from the VAE, Vermont artists EvenSteve have created an installation almost large enogh for a room, blending carpentry and digital photography and adapting to the space around them. Lonesome George, a giant coppery turtle, a metal sculpture by José Criollo, stands in the park across from the Vermont Arts Exchange in the North Bennington Outdoor Sculpture Show.

Matthew Perry, director at Vermont Arts Exchange sees Chirchirillo bringing back artists who have not joined in the show for many years. The VAE has played a role in the local arts scene for 27 years, he said, and has hosted NBOSS sculptures on their lawn and leant a hand with the show since the VAE moved to their current space from a nearby mill, seven years ago.

Bennington has a long history of well-known artists living and visiting here, Chirchirillo
said — Helen Frankenthaler, Kenneth Nolan, David Smith, Jules Olitzgy, Anthony Caro and more. The annual sculpture show began years ago with students Bennington College organizing an art opening for their own work, and it has kept that informal feeling.

In his hands the show opens and closes every year with live music and the feeling of a backyard summer picnic, and the artists will come up for it from across New England, he said — it feels like a reunion, even for artists who are new to town, and local people come to the party to join in. Wooden polyhedrons seem to float like bubbles across the sky in the North Bennington Outdoor Sculpture Show.

“The idea of sculpture and public art are woven into the community,” he said.

“It lives with us,” Perry said. “Kids here grow up with it.”

The VAE offers comunity arts programming and summer camps, and children in North Bennington see imagination tangibly around them, he said: “America has to strugle to keep the arts afloat. Anywhere else in the world, Bali, New Mexico, kids are making art.”

The sculptures in and around town are open to anyone, any time, dawn to dusk.

“I believe in public art,” Chirchirillo said. “I ask people to open their minds to it, not to be afraid of it … try to learn what people have in mind when they are making it.”

“If I come into a community and see public art, I feel different about that town than I would without it, because I feel as though this community is trying to be more inclusive — of everything. … We’re trying to open doors and build community, and it’s the most important thing you can do right now.” Sculpture waits on the wildflower walk at Bennington Museum Stone, bronze and glass are Taking Flight in the garden 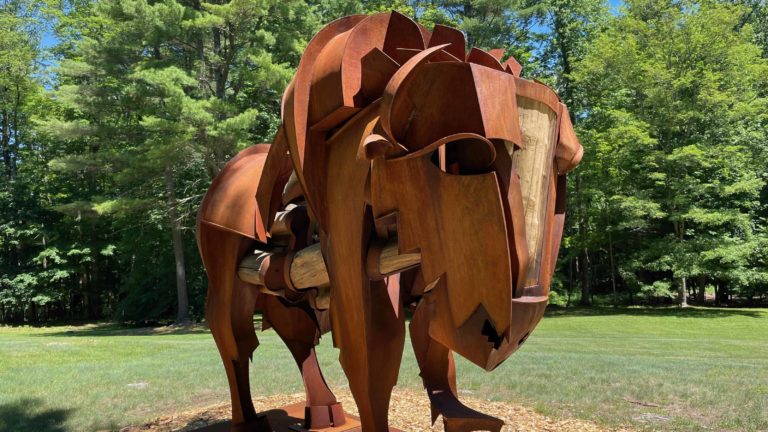