Cambridge poet Charles Coe can write with the crowd-surging energy of hot summer nights, soul and sweat and a jaunty smear of lipstick. And he can write with the warmth of holding hands. As a jazz musician who has had his word set to music, he has given tributes to Charles Mingus, James Brown, Ella Fitzgerald —

Ella, you didn’t just keep time
you grabbed him by the ankles
turned him upside down
shook the change from his pockets …

This weekend, he will come west to read his poetry with Berkshire poets Michelle Gillett and Leslie Harrison at the Mount to benefit Close Encounters with Music, in time for the publication of Gillett’s new chapbook, “The Green Cottage.” Photo by John Seakwood, Courtesy of The Mount

All three writers know how it feels to lose someone and how to say it to someone else so they will recognize the feeling, as bluntly as they know the taste of a hot cup of tea by a wood stove. On Saturday afternoon, they’ll explain.

It is a departure to have poetry in Close Encounters’ series of conversations, said Hannah Hanani, vice presient and secretery of the Close Encounters board of directors, but poetry has its own music, cadance and rhythms.

Coe met the Close Encounters through his work with the Massachusetts Culural Council, he explains. He coordinates the MCC’s literature and grant programs. Families gather to listen to Music After Hours at the Mount, Edith Wharton's historic house in Lenox.

“We had a delightful time,” Hanani said. “He’s very, very funny; he has a wry sense of humor. He’s a great chef and a [well-known] Boston host, an invitation to his house is coveted.”

And then, as he was leaving, he began to speak aloud one of his own poems in his warm, deep voice.

“I got goosebumps up and down my spine,” Hanani said. “It had resonances of T.S. Eliot.”

The speaker, talking to a prophesier of doom, ironically practices scowls and curses.

We can sit together then …
and laugh at those fools who still believe
that a life can be saved
by one hand reaching for another.

Coe called that belief in a hand reaching out his mission statement, the core he comes back to.

Hanani admires his wisdom, his “profundity, cynicism and a worldliness that allows humor to seep in,” she said. John Seakwood / Courtesy of The Mount

So he and Close Encounters agreed to work together, and he chose two Berkshire poets to join him. Gillett shares his belief and his understanding of loss. Her book gathers poems she wrote in the last four years as her parents health declined and they died, and she lost her sister-in-law.

Her poems talk “about endings and how you get past those endings,” she said, and she too returns to apple sauce, bluegills, delphiniums, to living things and the comfort of a voice in the dark.

“The earth’s sweet / insistence steadies us,” she writes.

Harrison, in her “Displacement Poems,” holds her cup of tea before dawn, grappling with loneliness in clear, aching lines. 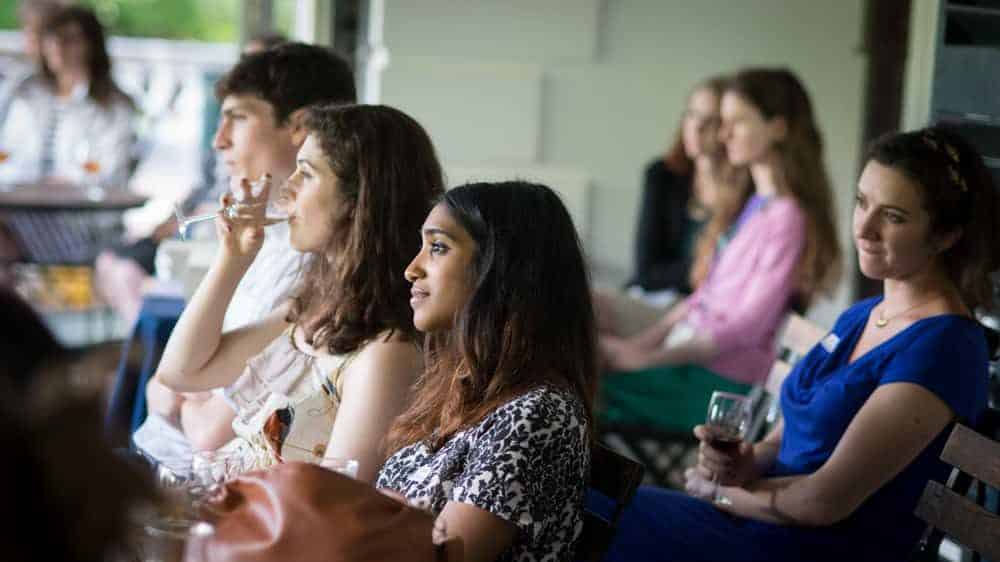 Courtesy of The Mount

An audience gathers for the new release of Edith Wharton's 'A Motor Flight through France,' at The Mount in Lenox.

It is easy to feel dazed in a world of “virtual relationships,” Coe said, “where someone can claim to be in an intimate relationship with someone 6,000 miles away who they’ll never see or hear, but they don’t know the name of one person on their floor of the apartment.”

The title poem of his book, “Picnic on the Moon,” began writing itself during the conflict in Sarajevo, he said, when he saw an image on the news of a sled overturned in the snow, and beside it a blotch of blood.

“Everybody is afraid of the same things,” he said, “getting sick, getting hurt, someone doing you wrong.”

And his answer is the reaching hand — in the silent intimacy of a mother cutting her son’s hair, or in a jazz riff on “Moonlight in Vermont” bringing the scent of fall even into a pressure-sealed spaceship. Poetry lets people talk about their raw places. Berkshire musicians perform at Music After Hours at the Mount, Edith Wharton's historic house in Lenox.

“One great thing about poetry,” Coe said, “something it does that nothing else can do — a person without materials or any training or skill can produce a full-scale work of art.”

He teaches writing workshops for many people and places. A man in prison wrote about the first day his daughter called his ex-wife’s new husband “dad.”

A fifth-grade girl said, “when I talk to my fish, it doesn’t interrupt.”

“Improve on that line, please!” Coe said, delighting in all she had said in those few words. “You in the back, Mr. Pinskey, you have a better line? Ms. Oliver, turn off your iPhone and pay attention!”

In fact, he has a resilient respect for former National Poet Laureate Robert Pinskey and Pinskey’s “Favorite Poem Project,” which gathered responses from more than 18,000 people of all ages and backgrounds and assembled videos of Americans reading the poems they chose — and all this long before YouTube.

“It encouraged people to claim poetry,” Coe said, “put two feet on the ground, recite it and talk about why it matters.” Charles Coe and Michelle Gillett shared a picnic with poets