A
150-year-old mill at the fork of the Hoosic River is now the largest contemporary art museum in the country, and one of the largest on the planet.

New exhibits open each season, bringing artists from across the U.S. and the world, and long-term installations span many years, from Sol LeWitt’s rainbow swirl of murals to Laurie Anderson’s sound studio. Performances and residencies create new music, dance and film year-round, with major festivals in the summer and fall.

And the buildings themselves are beautiful. The old factory has opened into wide halls full of light. Bridges join brick courtyards like a medieval stronghold. Paint rubbed into the brick shows the ghosts of vanished rooms. Old glass ripples in the windows.

The museum has a cosmopolitan grace with the open ridge lines of the mountains on all sides — the old factory clock tower, the silver Airstream crash-landed on the roof and the upside-down trees. A woman finds beauty and strength in herself, even in a world that can be threatening, in Cauleen Smith’s ‘We Already Have What We Need’ at Mass MoCA. Smith is an internationally acclaimed artist in film and fiber art and music, and like many of the museum’s artists this spring, she is affirming the voices of people who have felt unheard.

The colossal figures in Ledelle Moe’s ‘When’ catch the light like monuments to a new civilization. Mexican artist Erre looks at barriers and what they cost the people they divide. Argentine artist Ad Minoliti and Puerto Rican artist Gamaliel Rodríguez map richly colorful fantasies and futures. And a global group of artists in ‘Kissing through a Curtain’ plays with language and time and translation. The museum holds concerts and events year round — comedy, film, theater and dance, advance looks at work in progress and in-depth conversations with artists in the exhibits and in residence.

Music festivals here have grown international followings — Wilco’s bi-annual Solid Sound celebration in June, Bang on a Can’s classical minimalist marathon in July and the FreshGrass contemporary bluegrass weekend in September. Have a look at what’s coming next. The tenor from Mexico City is singing with brass, guitar and galloping banjo, and the sound draws people in until the crowd overflows the courtyard. The band has come up from Brooklyn, and people are dancing around the stage, spinning in each other’s arms.

Many of the contemporary artists here are performers. The museum hosts year-round concerts with international and Grammy-winning musicians, and residencies for works in progress — and major festivals in the summer and fall. 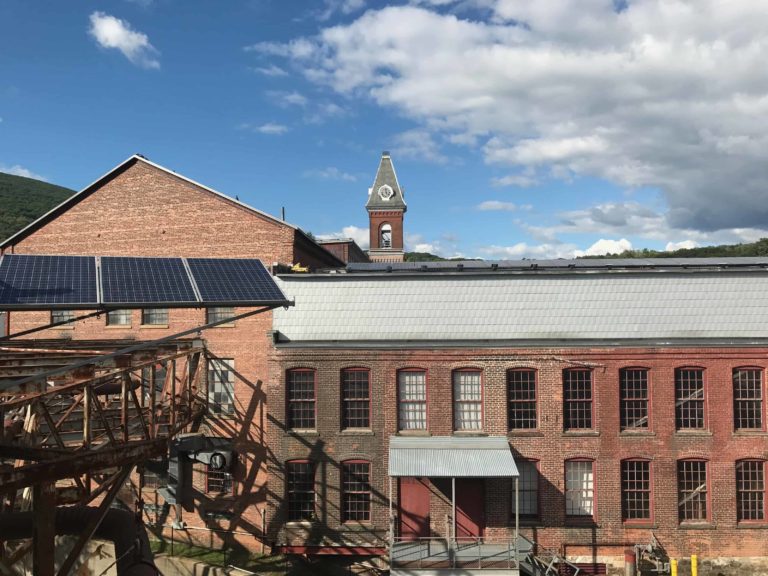 Mass MoCA has always been an unpredictable creative space — the kind of place where a piano tuner tests the arcitecture for balance.

It began in the mid-1980s. North Adams was at a low point — Sprague Electric, the city’s major employer for generations, was closing down, and the town was losing jobs at other mills as well. In their wake, a group of North Adams and Williamstown innovators started talking.

In the summer of 1999, the galleries opened for their first summer season. A horned motorcycle trailed the Fibbonacci sequence, metal floor tiles reflected colored light, and Robert Rauschenberg prints and collages filled a room as a long as football field.

Internationally acclaimed artist Armando Guadaloupe Cortés invokes his native land in his installation at Mass MoCA and animates his sculptures in performances.

Even in midwinter, artists are working in their studios here and curators are planning new shows — from wood-fired ceramic vessels to storm waves …

What can we imagine for 2023? … Looking ahead, I’m hoping for a rise in returning energy. 2022 has held quiet moments of intense beauty.

The solo rider in the single cart drops a full story in a rush, lifting both arms and shouting, and the cart slues into a wide arc. Los Angeles artist EJ Hill has created an art installation out of terror and delight.

The sun is setting early outside the long mill windows at Mass MoCA, and the ridges turn the color of E.J. Hill’s roller coaster tracks.

What I remember about FreshGrass festivals in the last 10 years or so is all over the map. It’s a mild fall day and I’m in the courtyard playing Farewell to Whiskey …

Yacouba Sissoko, one of the most sought-after kora musicians in the world, has joined a growing and global group of musicians who have come to the Berkshires for FreshGrass.

The tuning of a banjo blends into the tempo and strum of son jarocho, Mexican folk music from the Gulf coast, as Rana Santacruz sings his own original music.

Cafuné performs at Mass MoCA, and Noah Yoo talks about nostalgic influences, fan engagement and being a musician in 2022.

She’s wading knee-deep in the meadow, and the sky moves in her eyes. She’s standing among friends on an open hillside below the Taconic ridge …

Artist Armando Cortés returns to his installation Castillos, in Ceramics in the Expanded Field, with a new performance of aún los gallos lloran (Even Roosters Cry), activating his artwork.

Musician JLin and multidisciplinary artist Florence To will present their new collaborative project, Akoma, a concert/installation and ‘symbolic presence of heart and drum.’

Artist Armando Cortés returns to his installation Castillos, in Ceramics in the Expanded Field, with a new performance of aún los gallos lloran (Even Roosters Cry), activating his artwork.

Mass MoCA’s artists-in-residence at The Studios — where you may meet a fiber artist, an Affrilachian Poet and a Cave Canem fellow and game designer, a fourth-generation asian American artist exploring collective memory, generational narratives, histories and space, a visual album maker from San Francisco, an Afrofuturist poetry slam champion, […]

Ivy Sole, an acclaimed rapper-singer and rare hybrid of sultry and soulful R&B paired with hip-hop lyricism, will perform at Mass MoCA.

Artist Marc Swanson will talk with writer Maggie Nelson and artists Susannah Sayler and Edward Morris about their works on mourning and climate change.

Mass MoCA opens for a night at the museum on the second Thursday of each month this spring, to explore the exhibitions in Buildings 4 and 5 with live performances.