Sarah Kenyon / Courtesy of The Mount

n a warm evening in 1902, Edith Wharton sat on the terrace here with friends. They were talking over Walt Whitman, reading Leaves of Grass aloud. They could look across the lime trees to the lake and listen for tree swallows on the lawn.

She drank in intelligent talk. This kind of curiosity sheer pleasure in ideas was new to her. Since she had built this youse a year ago, she had foudn new energy here, new work and new friends.

She was becoming a writer. In 1921, she became the first women to win the Pulitzer Prize in fiction, for her novel The Age of Innocence, and by then she had been writing bestselling novels and stories of Gilded Age New York for more than 15 years. But they began here.

She wrote many of her best-known novels in this house, in the 10 years she lived in Lenox — from The House of Mirth to Ethan Frome, set in the Berkshires.

Her house is now a museum, a center of writing, music and performance, landscape and gardens, dedicated to keeping her spirit alive. Edith Wharton designed the house and grounds here — open woodlands carpeted with ferns, fountains and flower beds and a long walk of linden trees. I've heard she loved ostrich ferns, and when she found them on her neighbors' lands she would dig up (with their permission) and carry them home in the buggy to plant under her trees.

Coming from a wealthy family in New York, she had traveled widely in Europe, and her house shows the influence of Italian art and architecture. Tours will talk about her eye for design and her experiences here, as well as the lives of the men and women who worked for her in these rooms. John Seekwood / Courtesy of The Mount

Contemporary performers fill Edith Wharton's house, and her words, with meaning. Actors perform her short stories on the terrace and Shakespeare on the grounds. Spoken word and comedy open contemporary themes.

In summer, Music After Hours brings free live concerts on Fridays and Saturdays in July and August — guests can relax to jazz, blues and acoustic chords, with a glass of wine. 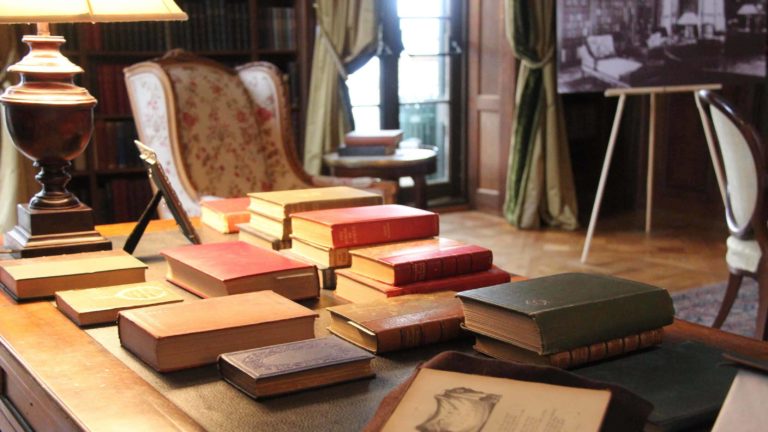 Bestselling novelists like Lauren Groff share their work in conversations with Heidi Pitlor, editor of the Best American Short Stories, and a reading series brings weekly talks in the summer and fall. And writers in residence work on new fiction and nonfiction in the spring, looking out her window at the thaw. 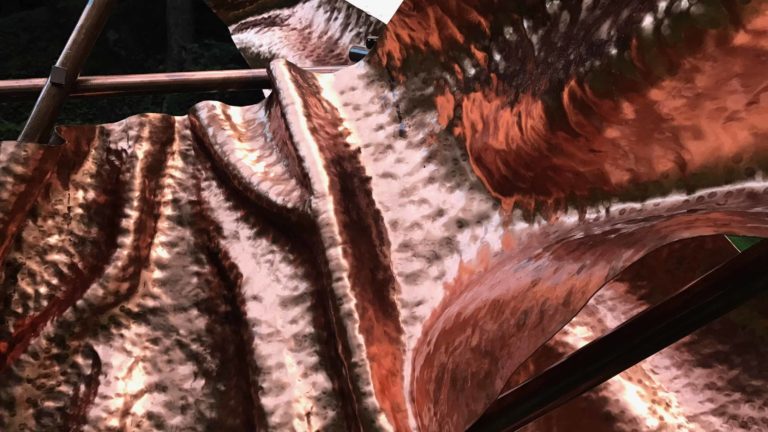 SculptureNow at the Mount / Photo by Kate Abbott

Sculpture on the grounds

Every summer and fall the Mount welcomes a new show of outdoor sculpture along the walkways, in the gardens and on the lawns. Curated by the Berkshire organization SculptureNow, the group show can range from natural to urban in feel, with works in wood and metal, fiber and stone.

A hundred years ago, after World War I, Edith Wharton wrote The Age of Innocence. This winter, her own copy of the book has returned to her library at the Mount.

On the flyleaf of a book of Japanese poetry translated into French, penciled handwriting tries out haikus. Haiku would have been a less familiar form in the early years of the 20th century, when the owner of the book sat here in an arm chair, playing with ideas. The handwriting is Edith Wharton’s.…

In an old town in northern Florida, a woman is walking at night. It’s raw weather even there, and she walks fast, angry and alone, and in the dark her neighborhood looks half marvelous and half brutal — bird of paradise flowers and black swans and old Victorian houses sagging…

Get behind the scenes, get muddy, get up close to paper and paint and clay. ArtWeek crossed the state to the Berkshires in April and May 2018 with dozens of events, most of them free …

The Germans called them the Night Witches. In World War II they flew planes made mostly of wood and canvas at night, without parachutes or radios. They were a Russian regiment, a few hundred women as young as 17. In 1941, the Soviet air force became the first in the…

Two women are sitting at an outdoor table at the cool end of a hot day in Rome. They are looking out at the ruins of the Roman forum, and they have known each other since they were teenagers. On another ridge, another woman is thinking with longing and fear of…

‘And there was distant music, simple and somehow sublime’ … and getting closer. This weekend, Ragtime takes Barrington Stage Company back to the turn of the 20th century, as a stifled housewife, an immigrant father and a musician from Harlem fight for their own real American dreams. It’s July in…

Kate and John Derwent are newly married and in love, and she is warmly close to his 13-year-old daughter. After the early death of his first wife, they have slowly rebuilt a family. And their trust is about to face a radical test. Kate was the nurse who cared for…

The French lilac are blooming in wide arcs in the gardens at The Mount, at the end of the lime walk. Standing in the circle of bushes, I watched two swallowtail butterflies touch down for a drink. In the woods yellow iris still show in marshy places, and around the…

In the evening, they share a house in Lenox. They sit up late, talking and making pizza. They read each other’s work or watch Martin Scorsese’s adaptation of The Age of Innocence. And each day they write at the Mount, in Edith Wharton’s inner rooms. Vanessa Manko said whatever she…