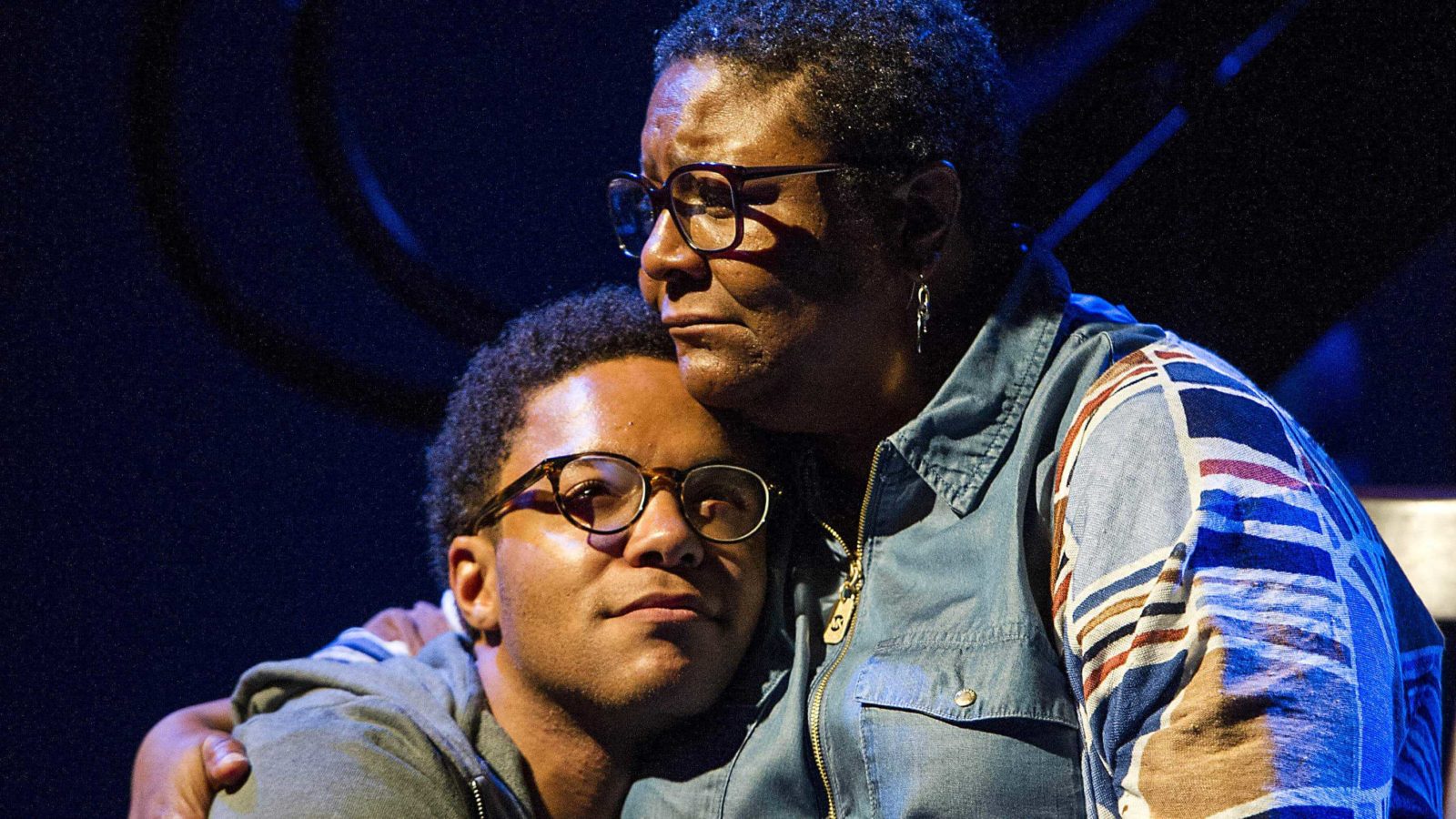 Where Storms Are Born electrifies the Williamstown Theatre Festival

Two boys sit on a fire escape together, tracing the stars in the city sky. They are brothers, and they have lost their father. Now the older brother is a memory, and the younger brother and his mother are facing his loss, in the world premiere of Harrison David Rivers’ Where Storms Are Born, directed by Saheem Ali, on the Nikos Stage at Williamstown Theatre Festival through July 23 (in summer 2017).

At its core, Rivers said, this is the story of a strong, loving family.

“I’m the matriarch,” said Myra Lucretia Taylor, who plays the mother, Bethea. “I’m tasked with making my family whole, through love and faith and truth.”

Her living son, Gideon, has come home to help her and to face what he feels for his brother. Gideon was 14, and Myles was 18, when they were separated. Myles has been imprisoned for 13 years. As the play begins, he has just died, still imprisoned.

He appears in memories.

“He’s a dreamer,” said LeRoy McClain as Myles. “He’s an intelligent guy dealing with sins of the past and not living up to his role in being there for his brother, being that kind of guiding light and supportive force for him, not living up to the promise and hope his mother has always seen in him. We witness him coming to terms with all that.”

His family and friends feel his presence too. They need to set a place for him at the table, Rivers said. They are struggling to know how to hold on and how to let go.

Sometimes they are asking what they could have done differently so the person they have just lost would still be there, said Joshua Boone as Myles’ friend Benton. Benton is a good kid who has made some bad decisions, Boone said. He feels close to Gideon, and he wants to reattach to Myles’ family and is not sure how.

“It’s a beautiful thing,” McClain said, “that this play captures the ways each character in their own way deals with grief and loss. … It’s combustible and compelling.”

“This whole play is love, everywhere you look,” Taylor said, “trying to touch it, feel it, live it, extend it. Love can get you through a lot of things.”

Her fellow actors find that warmth and care deeply moving.

“It’s powerful to see these black men on stage love each other,” said Joniece Abbott-Pratt as Worthy, Gideon’s best friend. “You don’t see that.”

To see black men being tender with each other is real and forceful, and rare in a play, agreed Christopher Livingston, who plays Gideon.

Rivers gives them vulnerability, McClain said: “It’s not about swagger or bravado. … For each character to feel that deep and well-rounded as characters of color is a beautiful triumph for him.”

Ali too said he has never read anything like this play before. Its poetic language, muscular tones and sharp edges feel new and unexpected, and its humor and sadness and life.

People are grieving, and they are feeling deeply in many ways, Rivers said. They may find themselves laughing so hard they’re crying — and realize it’s the first time they have laughed like that in a long time: “Do I feel guilty? Is it because of the person I’m with? Have they brought back something that feels like the old me, something I want to get back to?”

Gideon begins to reveal a side he has not shown in years — his joyful, loving, sexy side — Abbott-Pratt said. She comes as a warm ally to help him gather his strength.

The play has evolved this summer as Rivers has worked on it with a full cast for the first time. Collaborating with Ali is joyful, he said, and he feels he is making a play with a friend and a family.

Ali warmly praised the actors for whole-heartedly putting energy into lines and scenes that can change from one rehearsal to the next. They need to be aware, he said, and willing to dive into raw and intense feeling.

The cast shared that feeling of excitement in new work and pleasure in working together.

“Saheem and Harrison may be some of the smartest people I’ve worked with,” Boone said, and Taylor agreed: “They’re so generous, so thoughtful … so organic. They keep growing. They’re alive.”